Fortnite is still one of the most popular – and hotly-discussed – games among young people. But what does it involve, and how safe is it for children?

Here's everything you need to know.

In Fortnite, players collaborate to survive in an open-world environment, by battling other characters who are controlled either by the game itself, or by other players.

The single-player or co-operative (played with friends) mode, called 'Save the World', involves fighting off zombie-like creatures. Fortnite’s most popular mode is its standalone free-to-play multiplayer platform, Battle Royale. Up to 100 players enter an online game, competing individually or as part of squads of up to four, to be the last player standing within an ever-decreasing battle arena.

There is a Creative Mode, in which players create their own building and play mini-games, and Fortnite is also looking to branch out into other forms of entertainment – like offering users the chance to watch live (and virtual) performances from celebrities and pop stars.

To play, users create an account by providing an email address, which they'll have to verify, and creating a username. There is no strict age-verification process.

Why is it so popular?

It's free, and available on a huge range of devices - Playstation 4, Nintendo Switch, XBox One, PC, Mac, iOS and some Android devices too.

The gameplay is simple but extremely immersive. Multiplayer games last up to 30 minutes, and players can quickly re-enter a new game.

It is attractively designed and, with weekly updates and challenges, is constantly evolving. Fortnite has a massive social media following (via video and streaming apps like YouTube and Twitch), so children might feel left out if they don't play.

What do parents need to be aware of?

Because of its frequent scenes of mild violence, Fortnite is rated 12+ by PEGI. Violence is cartoonish, but some characters and scenes might disturb younger players.

As with many games of this type, plenty of children younger than 12 are playing, so it's important that parents are aware of the risks and understand how to help their children play safely.

Fortnite's Battle Royale mode has an unmoderated chat functionality in which players are open to communications, either by voice or on-screen, from anyone they are playing with.

Just like other games with chat functions, children may be at risk of exposure to inappropriate language, bullying or extremism.

Fortnite allows for voice-chat to be disabled. There are also settings that allow you to filter out mature language and the possibility of receiving friend requests from players you don't know.

Make sure that children understand what to do if they encounter any unpleasant behaviour whilst playing Fortnite, and remind them not to share any personal information with other players.

If you’re concerned that a child may have had inappropriate contact with someone on Fortnite, you can also seek advice and make a report to CEOP, Child Exploitation and Online Protection Command, through their online safety centre.

Fortnite offers an in-game feedback tool in the Main Menu of the game to report bad player behaviour. You can also email Epic Games, the creator of Fortnite, through their website reporting any concerns you may have. 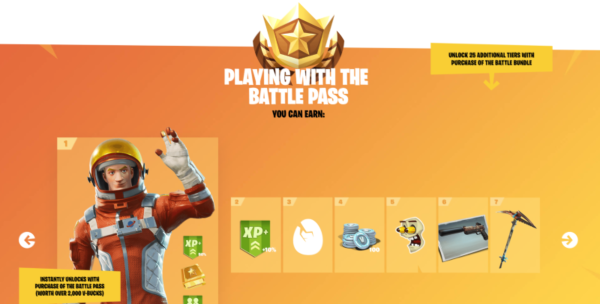 Fortnite is free to play, but by buying a season battle pass, costing 950 'V-Bucks' (Fortnite's in-game currency, 1000 of which cost £6.49) and lasting a full Battle Royale season (around three months), you can receive bonus rewards such as skins and extra challenges.

The game relies on loot boxes, which you can open by spending V-Bucks. As mentioned, you can either purchase V-Bucks with real money or you earn them through gameplay.

As with all games that offer in-game purchases, make sure that you don't have any card details saved on your devices. It is also important to discuss with children how in-game purchases are designed to pressure them into spending money. However, if they are still adamant that they wish to purchase items on the game, allowing them to do so with their own pocket money can be a great way of giving a child a greater sense of independence.

The game’s creators Epic recently had to issue a statement advising how users can protect their accounts. This included third-party sites falsely advertising free V-Bucks in exchange for personal information.

In the wake of the vast popularity of Fortnite – averaging around 80 million active monthly users – there have been several reports calling it addictive for children and claiming that the game induces competition-related rage.

Whilst the game might not be addictive in a technical sense, its style of play certainly does encourage users to have "just one more game".

It is important to speak to children about what is an appropriate amount of gameplay, and when. It is also important to understand the immersive element of the game and to respect that they may be emotionally invested in a game. Bear in mind that multiplayer games only last up to 30 minutes, so setting suitable amounts of play is easy without pulling the plug on their game.

Fortnite videos and their respective creators have seen an equally large boom in popularity as the game has grown. Most players will stream their gameplay via Twitch or on YouTube.

The same concerns are present for Fortnite videos as they are for any video on YouTube: essentially, the use of profane language and the discussion of topics which may be age-inappropriate.

To avoid this you can turn on YouTube’s restricted mode to block inappropriate content. Alternatively, you can discuss with your child what they are watching and then watch it with them so that you can decide for yourself as to whether it is appropriate or not.

Spot something that doesn't look quite right? You can email librarian@parentzone.org.uk to submit comments and feedback.

Read our guide to Roblox

Read our guide to Nintendo Switch